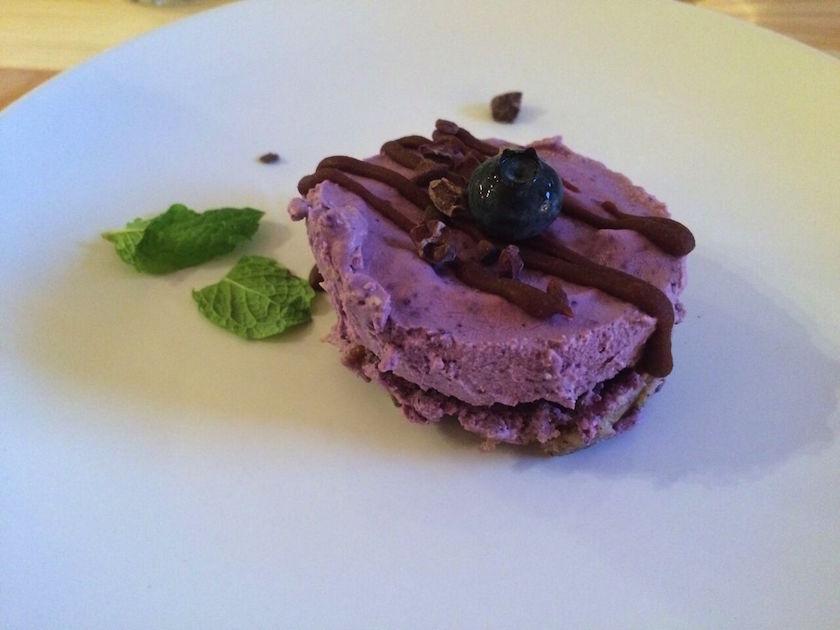 My introduction to what I now know as the awesomeness of Basal Eatery started with a simple request from a friend: “Hey, let’s go to this dinner next Monday.” Vegan, plant-based food. Only 10 people. $20 for a three course meal + wine. An opportunity to have an extraordinary evening on an otherwise ordinary weekday. It wasn’t a hard sell. I was in, and I remained excited all the way to the time… well, honestly, even after having already “done the do,” I remain excited about this new addition to the vegan-scape of Central Florida.

So, let me begin by being honest about myself: I have a strange “thing” about exclusive stuff. When I see the words “only,” “limited,” “select few,” the bougie side of me gets drawn in like a moth to a flame. And it really doesn’t even have to be something that cool. Just the mere fact that I may be one out of a few to have it, do it, participate in it, really gets me going. This little tidbit about me is what first drew me into wanting to know more about Basal Eatery and their 10-person-only Monday night dinners. It reminded me of something that I would most definitely see in the movies about a posh group of friends in NYC, and their cool nightly outings. If you know me, you know that I love all things posh, all things cool, and, most importantly, all things NYC. 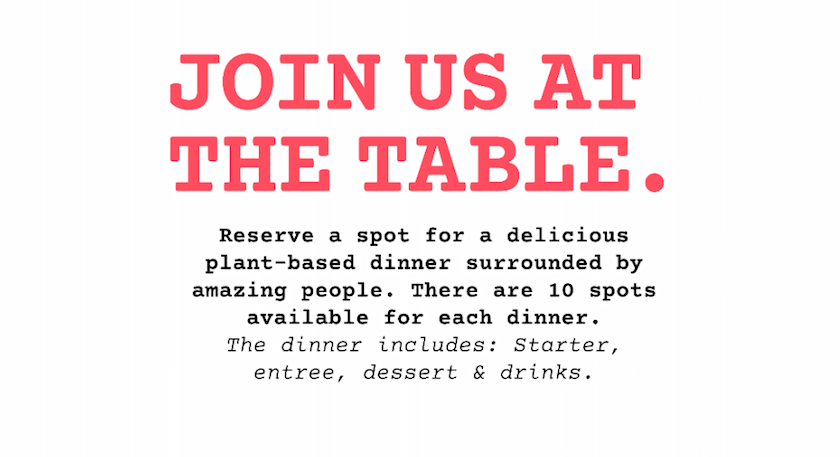 Once I was drawn in, my friend threw in her closing argument: this would be a vegan food experience. A few days later, I signed up, paid my money, and, with great enthusiasm, waited for the day to arrive.

After days of not knowing exactly where I would be partaking in what I had already deemed would be a life changing experience, the morning of June 29, which was the day of the dinner, I received an email with all of the event details. Yes, you read that correctly. Not only did I not know where the dinner would be held, but I really had no clue what time it started. For some odd reason, I was okay with this. My friend, on the other hand, was not. I guess she wasn’t quite used to the world of exclusivity. Sometimes you just don’t know, until you need to know.

I was the first to arrive that evening. The event details mandating that everyone “arrive at 7 p.m. sharp,” had me a bit on edge. I arrived with about 15 minutes to spare. Once I saw that we would be dining at someone’s residence, I decided that it would probably be annoying to arrive any more than about 5 minutes early. So, I waited a bit. Then once I figured that the time was more appropriate for my arrival, I slipped on my black pumps, threw my scarf over my shoulders, and slowly sashayed my way to the apartment number listed in the email. 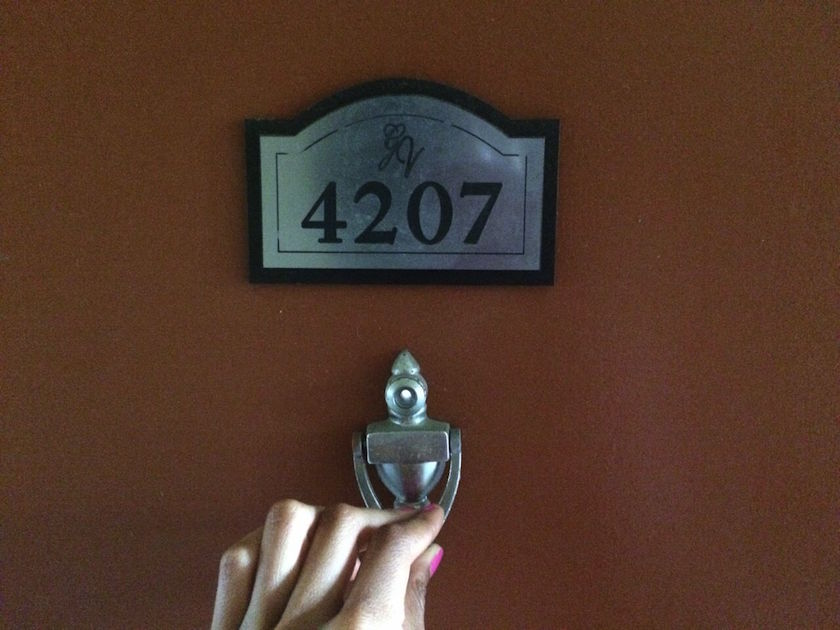 After a few knocks, I was greeted at the door by a young woman. For a split second, I thought that maybe I had knocked on the wrong door. But then, I saw the table. The table, which I had seen on the Basal Eatery website, is easily recognizable. 10 chairs placed perfectly around a rectangle, light wood colored table, with 10 place settings marked by red square trays. I had found the right place. I was kindly welcomed in to the home of whom I would later find out was the chef/owner’s residence with his wife and son. I immediately began taking in everything. From the art on the walls displaying plays and movies from local events to the little boy playing inside the kitchen enclosed by a “kid gate.” My excitement grew from there. 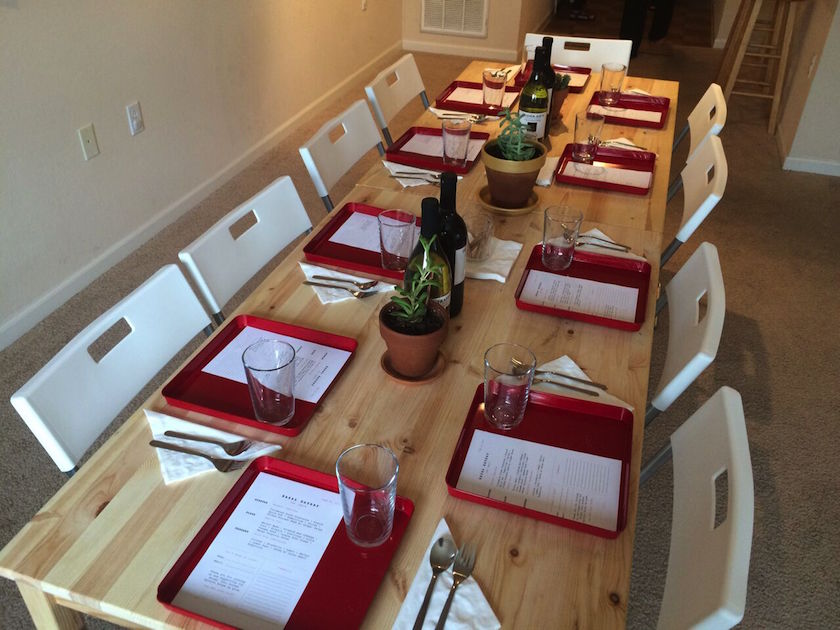 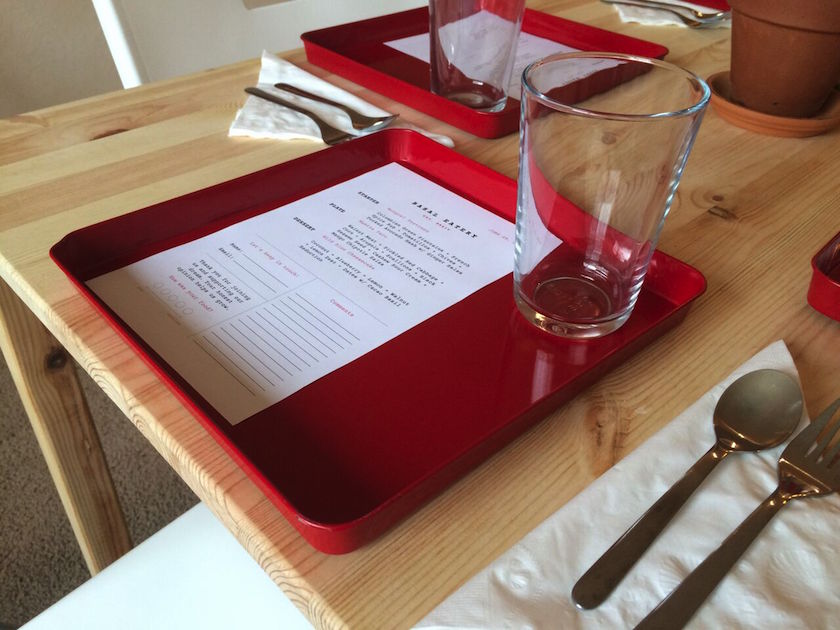 Once everyone arrived, the best part of the evening began: the food. Not only does Basal Eatery specialize in vegan, plant-based food, but they include raw dishes (not cooked above 108 degrees) on the menu, as well. Chef Bryce is serious about his food. After each dish was served, but before everyone dug in, he gave a short description of each along with the inspiration behind it. Three things stood out to me in his descriptions:

Basal Eatery is a concept, no fluff.

The purpose [of Basal Eatery] is to feed well.

[The food is meant to] Slap you across the face with flavor.

The dinners, although lovely, are a means to an end. The end, of which, is for he and his wife to raise enough capital to create a Basal Eatery restaurant somewhere in Central Florida. I will stop here, and let my pictures do the rest of the talking. They do a much better job than I can. Before I sign off, I will say that I had such a great time, and I am looking for my next opportunity to attend another Basal Eatery dinner. The people who I met that evening were kind, welcoming, and came from different backgrounds. I met a gentleman who was a meat-eating and meat-loving Texan. Although he had no plans of giving up meat, he enjoyed taking a meat-free break with his wife, daughter, and son-in law. This was his second dinner, and he raved about both experiences.

There is one more scheduled Monday night dinner coming up on July 13. I’m not sure how many more opportunities you will have left to experience this intimate and unique night out in Central Florida. Chef Bryce has larger events coming up later in the year if you are unable to participate in this one. Whichever you choose, I recommend that you go with an open mind ready to experience probably the best food you’ve had this year.

And now, the food. 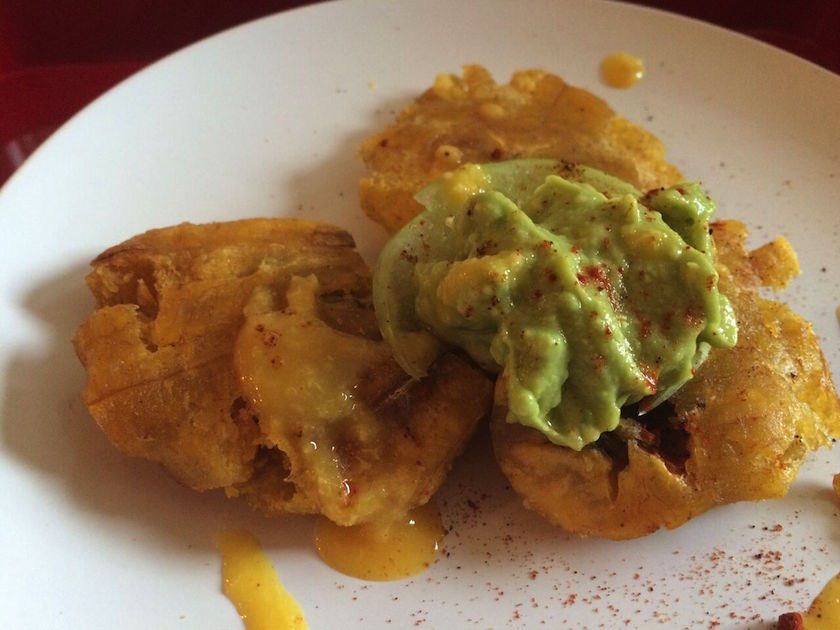 Our night at Basal Eatery began with Mongrel Tostones made with Colombian green plantains, French spice rub, tomatillos, chives, and forked avocado hash with ginger salsa. This was a great way to start the evening! 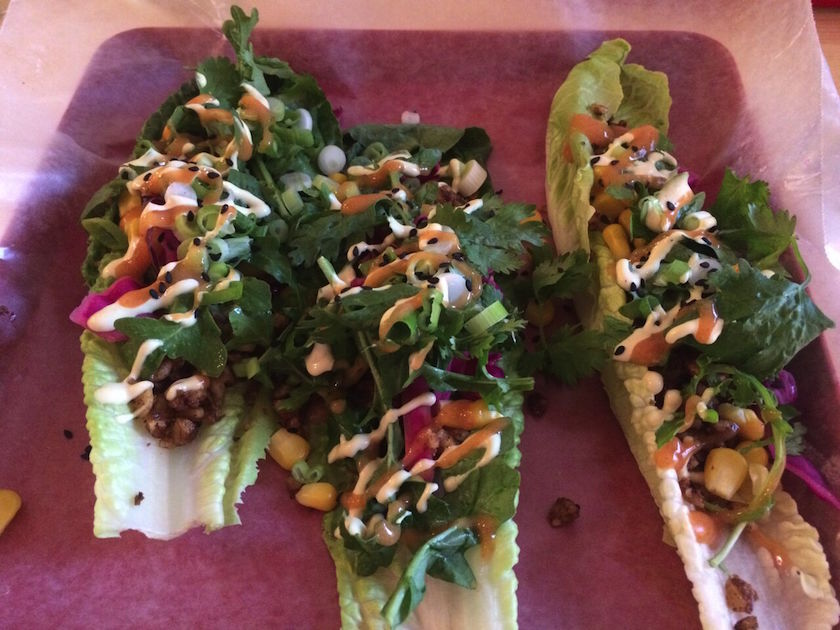 Mamita Tacos, which was the second dish of the evening was my favorite by far! The dish was made with walnut meat, pickled red cabbage, arugula, scallions, black sesame seed, cashew sour cream, and mango chipotle salsa. The flavors definitely “slapped me in my face!”

Wild Blue Cheesecake was the final dish of the evening. Made with coconut, blueberry, lemon, walnut, lemon zest, and dates with cacao basil reduction, this melted in my mouth. Plus the mint leaves were such a great addition! 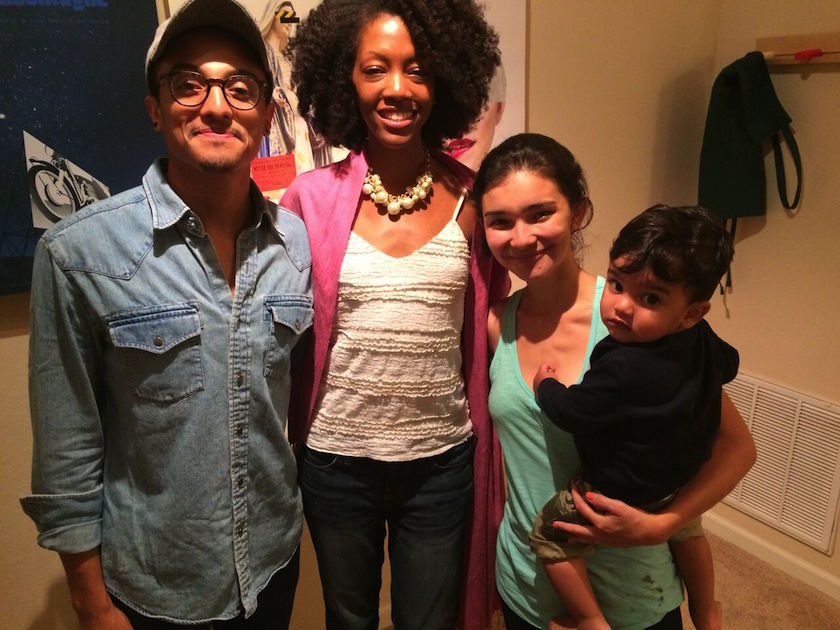 Me with Chef Bryce and the fam! 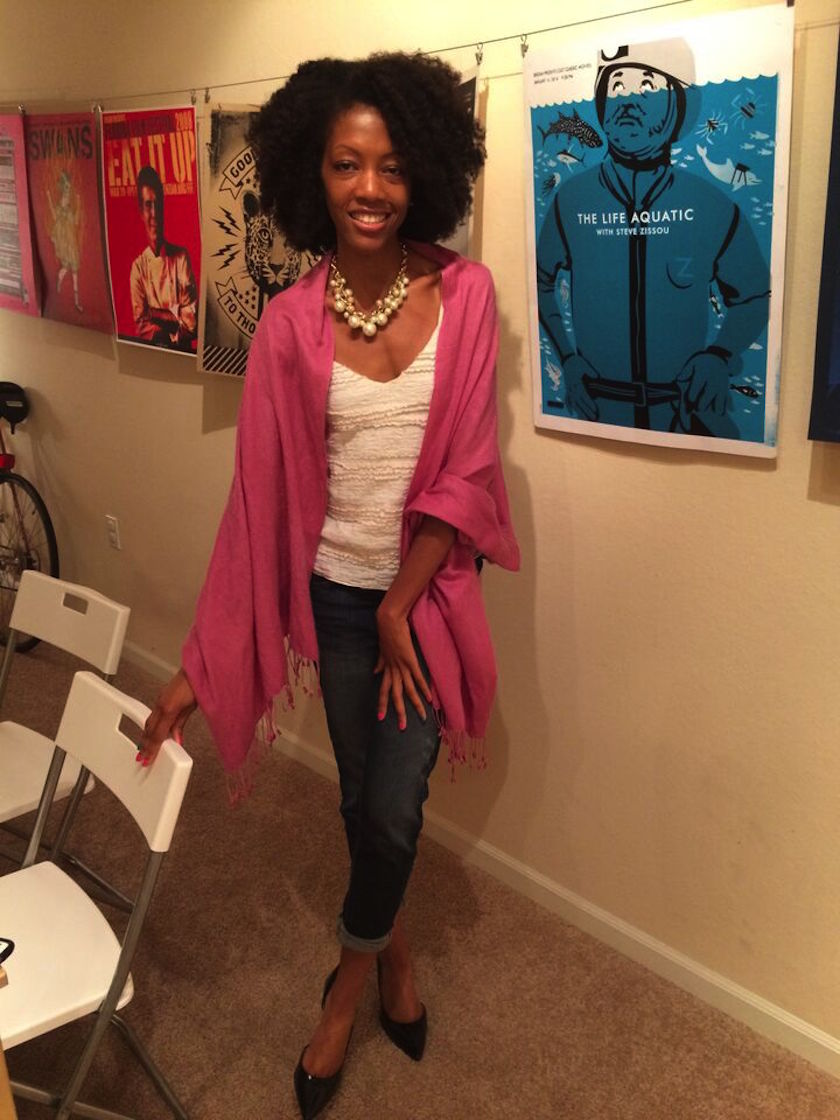 This is just me cheesing it up after a night of great food!

Worms and My Visit to the Botswana Embassy