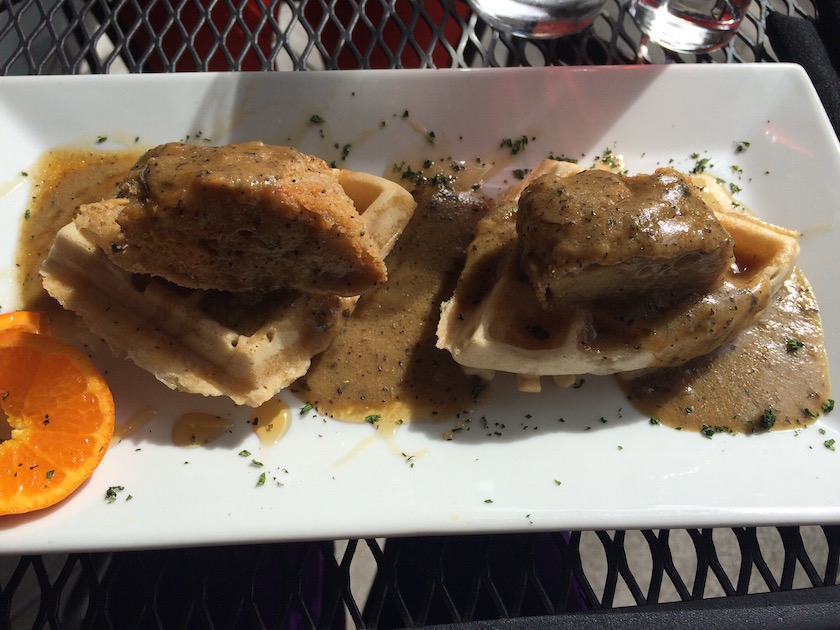 Chicken and waffles. I can’t say that I am a connoisseur of the dish, but I can certainly say that I’ve traveled a distance to try some of the more popular renditions, along with conducting important business of course. In Atlanta, there was Gladys Knight’s Chicken and Waffles and, in LA, there was Roscoe’s Chicken and Waffles. (Not that this matters, but I crowned Gladys Knight’s the winner.) Since jumping to the other side, I have been on the lookout for a meat-free edition of the dish. After years of looking, I finally stumbled across Daya‘s Chicken (Seitan) and Waffles brunch item, and yes, it was so worth the wait.

If you haven’t had the opportunity to read my first post about Daya (which you can read here), allow me to introduce you to Central Florida’s newest vegan restaurant! Daya is located in Winter Park and is described as “an upscale, 100% plant based restaurant.” For my first visit, I ate from their lunch menu, but with chicken and waffles on the brain, my second visit was with my mom for Sunday brunch. 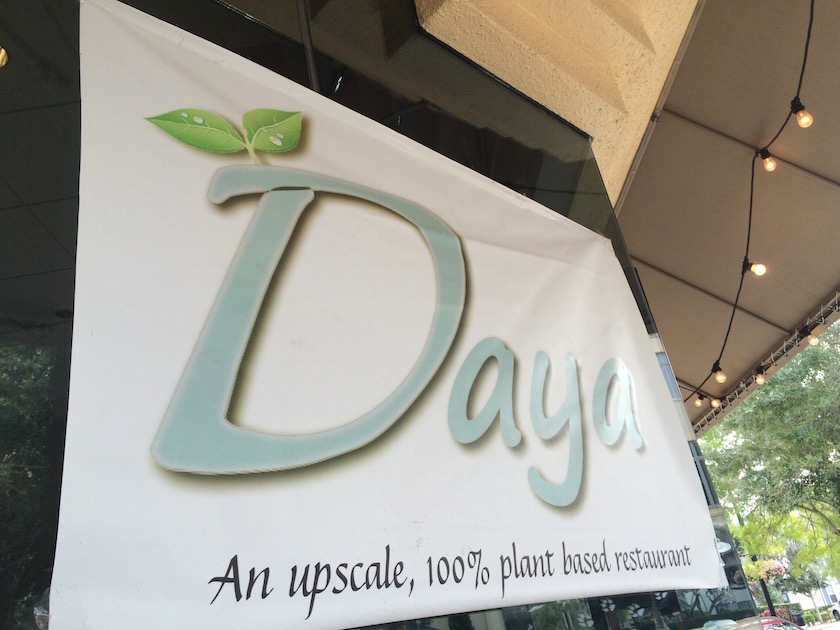 I started off my meal with a cranberry mimosa, which was in an uber sexy glass! 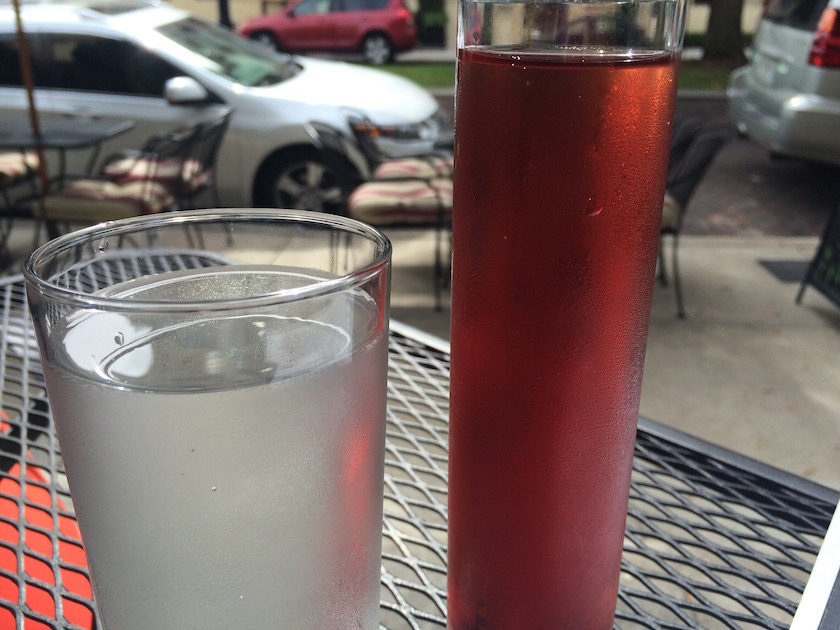 Then, it was time for the meal that I had been dreaming of for, what seemed like, years: vegan chicken and waffles. Actually, the correct name of the dish is “Jesse’s Chickenless (Seitan) & Waffles.” What I liked most about this dish is that it wasn’t your ordinary chicken and waffles. They didn’t take the traditional chicken and waffles recipe and just “veganize” it; they created a new, and shall I say better, rendition.

The sweetness of the dish was infused into the waffles. No syrup topping. The maple syrup was cooked directly into the waffles! (Can you tell how excited I am about this?) This was great because it allowed room for the savory part of the dish to be on display as well, which was introduced in the herb gravy that topped the waffles. So, with each bite, not only did I get the savory and saltiness of the gravy, but I also got this nice, subtle hint of sweetness. Talk about a beautiful circus in my mouth! 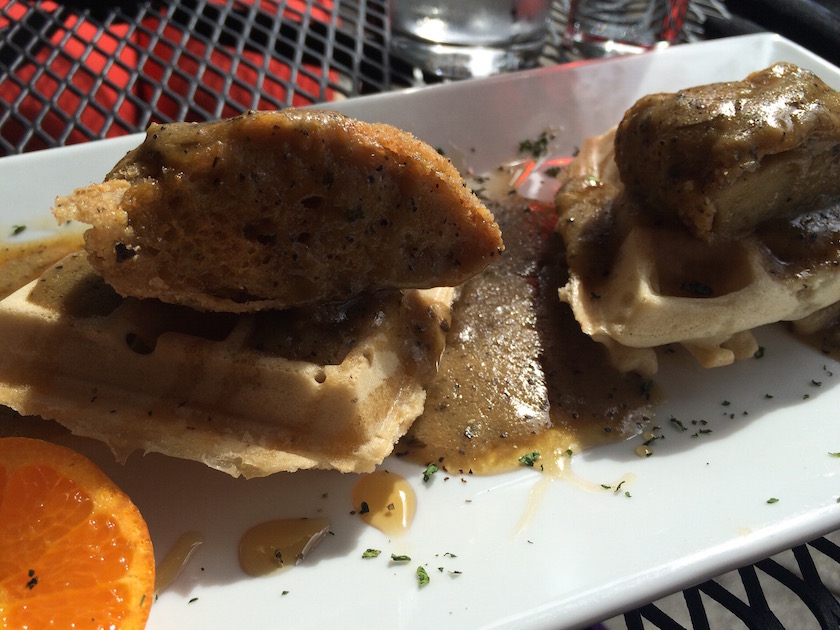 Let’s not forget about the seitan… So, to be completely honest, when I saw the seitan for the first time, my excitement dwindled a bit. I wasn’t sure what to make of it. Would it be crunchy? Would it be dry? Would it be a good alternative to the chicken that I was used to being in this dish?

Well, let me just say that all of my nervousness went out the window as soon as I took my first bite. The seitan, which I would like to mention is house made, had a nice crunchy top layer with a thick, hearty middle. Both the herb gravy and the slightly sweet Belgian waffles complemented the seitan so well. 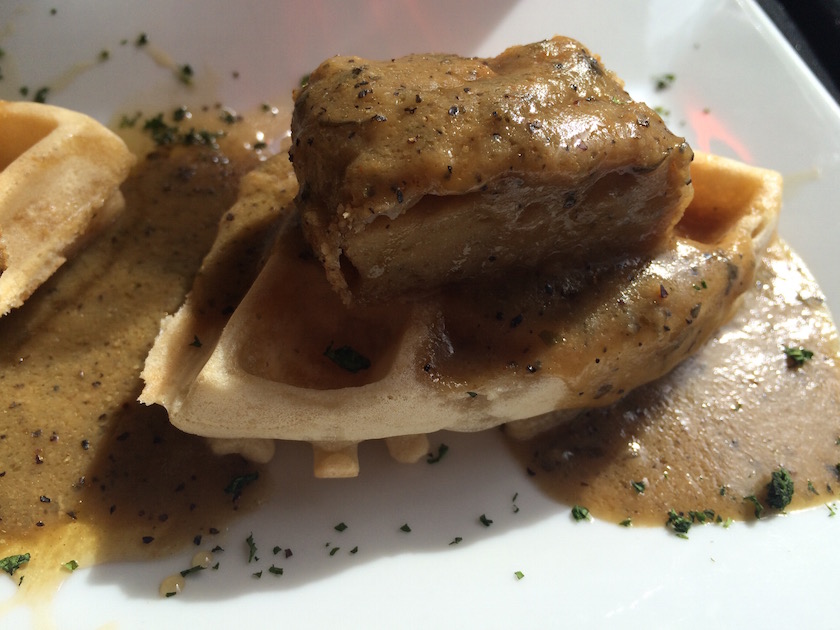 Oh, and yes, there was dessert! Why did my mom and I order dessert during our brunch outing?? Simply put, after seeing a picture of the chicken and waffles dish prior to arriving at Daya, I just didn’t think that it would be enough to fill me up. Yep, I (we) were being quite greedy. Because of this, when we ordered our food, we made sure to also put in an order for this amazing Rocky Road Parfait.

The parfait was a mix of house-made granola and yogurt, almonds, chocolate chips, and marshmallows. It was so good! Plus, it was a great ending to an amazing Sunday brunch. I will say that although it was good, it wasn’t really necessary. The chicken and waffles filled us to the brim! 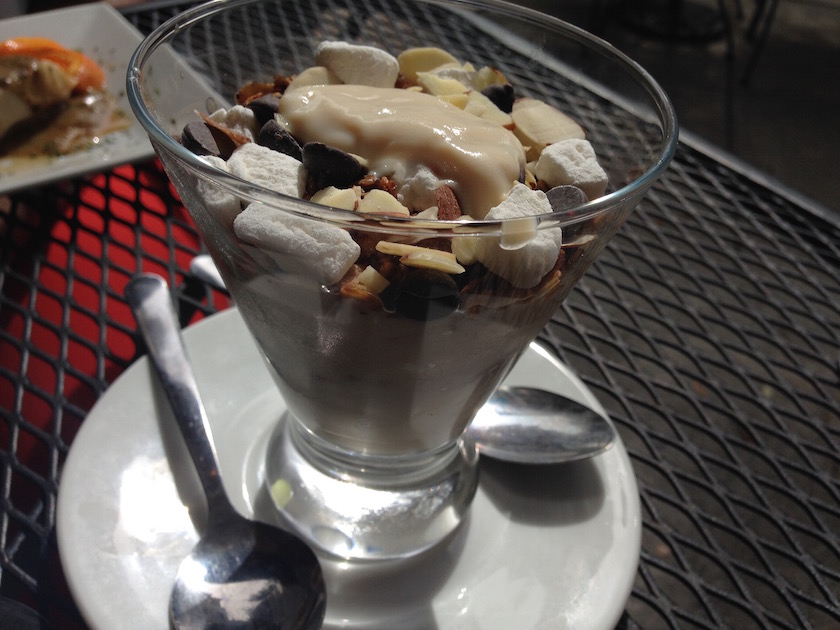 Brunch is only available on Sundays beginning at 10 am. Be sure to grab a seat outside and enjoy the great weather and people watching along with some great vegan food! 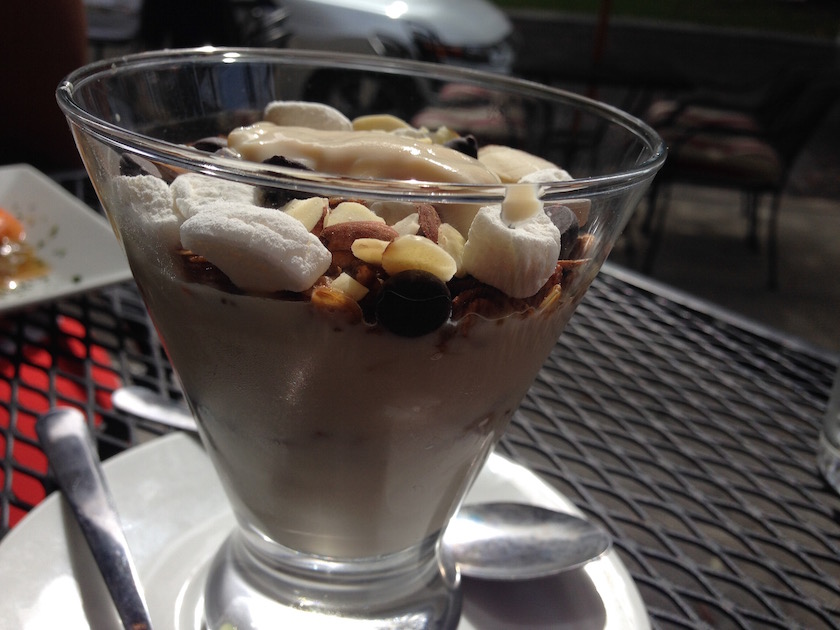 I’m not a big fan of salads, but Designer Greens has won me over